The church of St. Stanislaus the Bishop and martyr in Koźmin originally belonged to the Bernardine order. This fact is subtly referred to not only by cloisters of the monastery, but also an unusual main altar and the benches in the chancery. 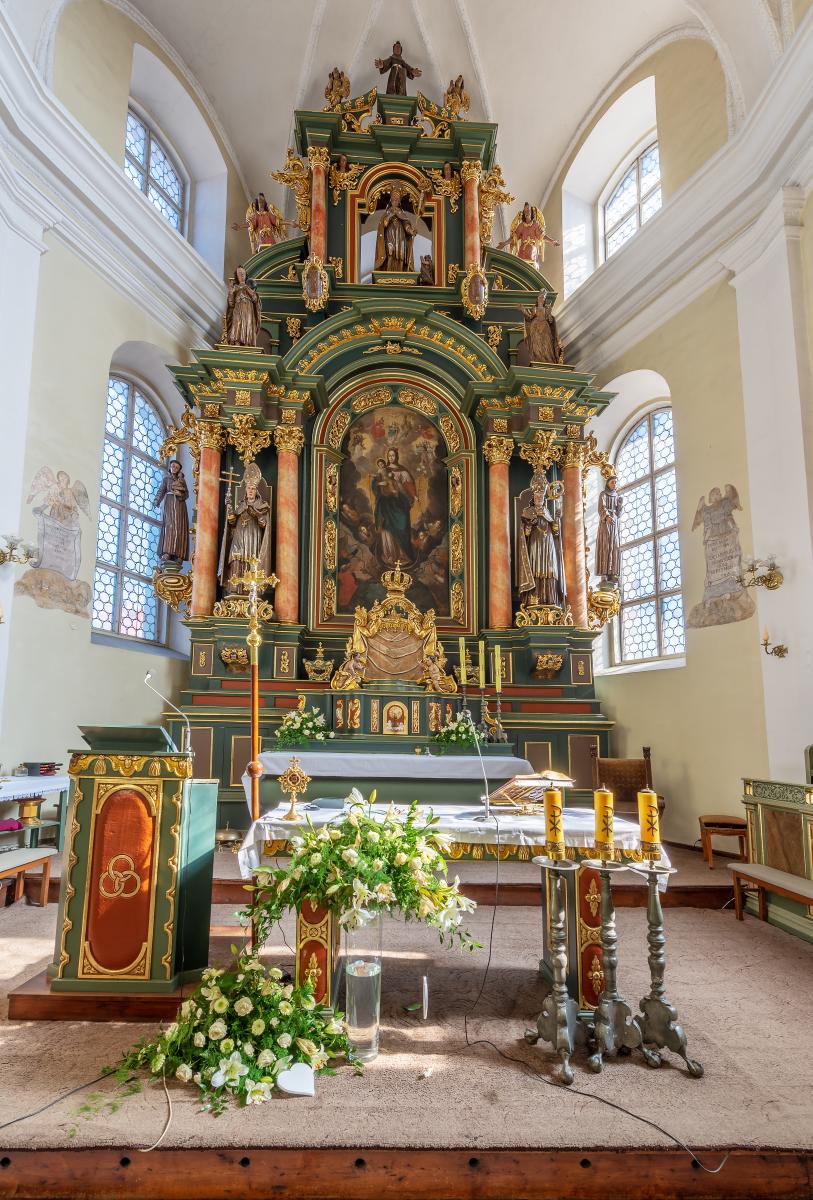 The altar dedicated to the Blessed Virgin Mary, St. Francis, and St. Anthony is considered miraculous since for 280 years now miracles experienced by the faithful in front of it have been listed. Prayers raised in front of it to the Almighty are being listened to due to Mary.

In the main panel of the altar an unusual painting full of hidden meanings was placed. It shows the Virgin Mary holding Baby Jesus on her right arm. It is an artistic vision of the Virgin of the Apocalypse who is standing on a crescent moon, form the bottom of which a dragon emerges – the symbol of Satan. Especially intriguing are figures of archers symbolizing human sins and who are shooting arrows to Madonna. Fortunately, in her defense come cherubs armed with shields. At the top of the painting, among angels, the who scene is being observed by the Holy Trinity. This image is exceptionally rare as in Poland only seven or eight similar paintings can be found. 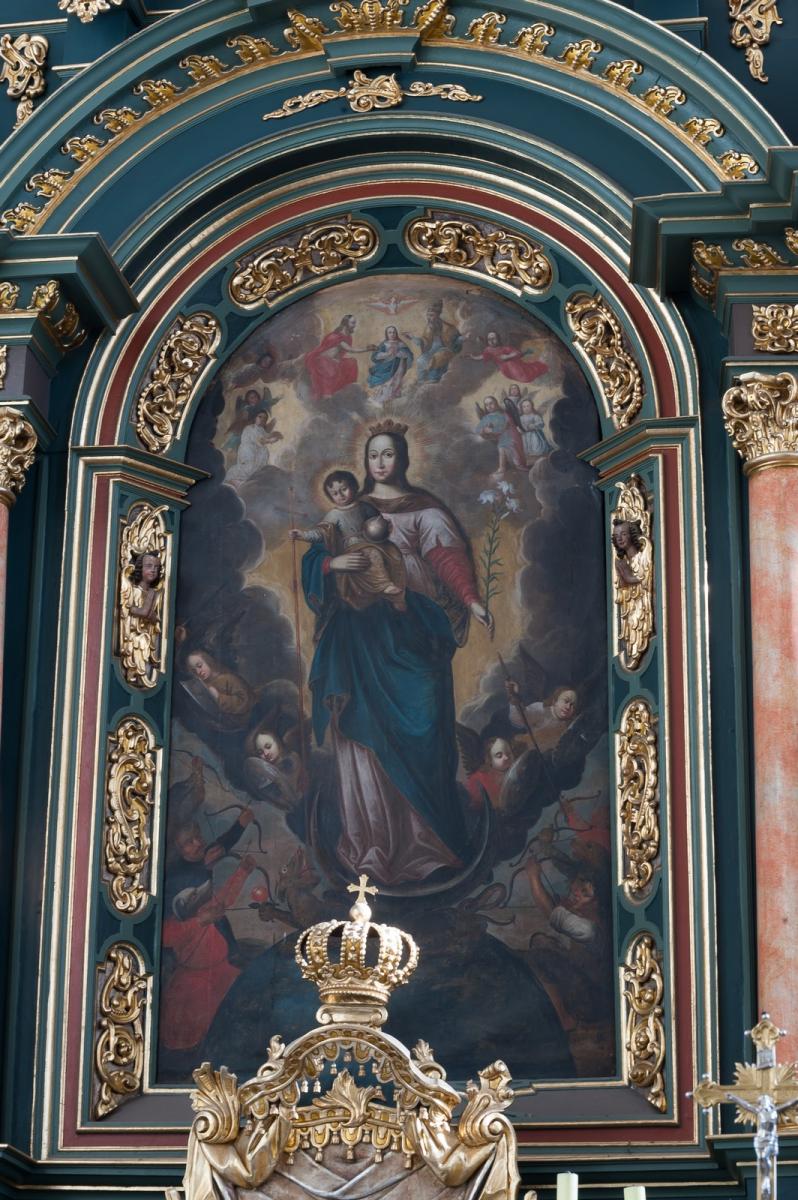 Richly decorated monastery stalls  are another proof of the church’s monastery history. The stalls were used by the Bernardines during daily prayers. Monks used to spend many hours of their secluded lives on those hard, uncomfortable benches with kneelers. It was not unusual to hold a service early morning when the eye-lids were heavy and eyes still sleepy. This is why the benches were made in this way so that they prevent the monks from falling asleep.

Images of Polish saints and blessed painted with great care on the backrests also help to focus on one’s prayer. Each figure enveloped in bright halo is probably aiding the people who pray there and through their pious lives they encourage perseverance not only during prayers told in wooden benches. 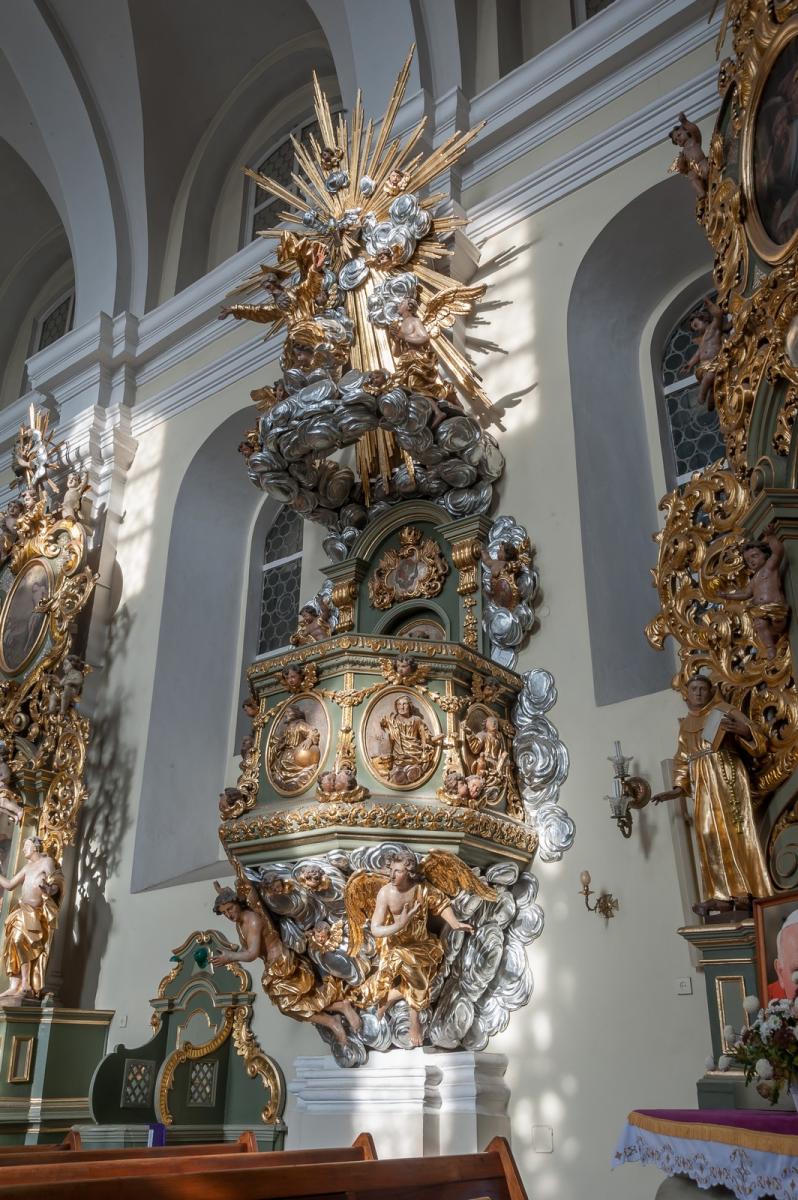 The Baroque art was born during times of religious unrest and reformation. It had one principal aim: to draw attention of the faithful and assure them in the Catholic faith. Because many people were illiterate, visual arts took the role of texts. It this way painting and sculpture became very visual “letters” of Biblie Pauperum (the Latin name for the Bible of the poor, the lowly ones, i.e. those who couldn’t read), affecting the viewers in a suggestive way. It is precisely why the flamboyand and curvey Baroque figures and characters look immobilized, dramatic, expressive in gestures. As if they were actors who play their roles in the “mission theatre” of the Catholic church, to the greater glory of God.

One of the tools of Counter-Reformation were music and words. That’s why pipe organs and pulpits were very important in Baroque churches.

The first pipe organs which were mounted in the church in Koźmin played for almost 150 years. When they broke in 1779 a new instrument was ordered. It took 3 years to finish it. Till this day the pipe organs’ sound entrances, “caress ears by their sonorous voice”. 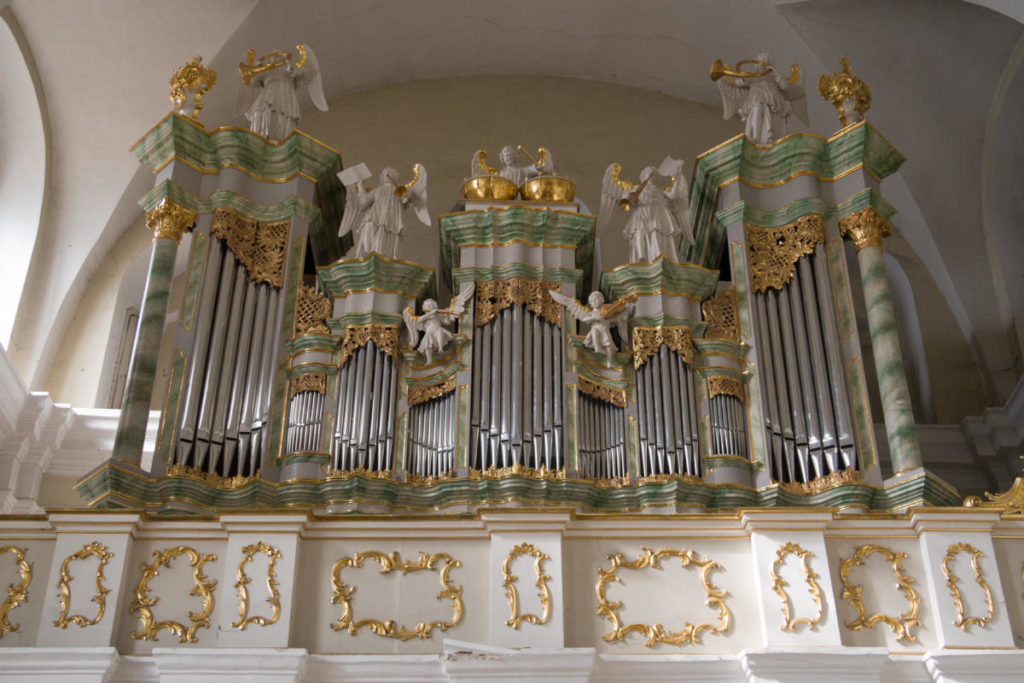 1
Angels who are playing the horns, trumpets, flutes, drums and violines.

Probably together with “the music of the heavens”, real sounds of pipe organs sounded even more magnificent. The faithful were charmed not only by the things they saw but also by the things they heard. Baroque compositions for pipe-organs written by such masters as Liszt and Brahms were a perfect soundtrack for the liturgy. 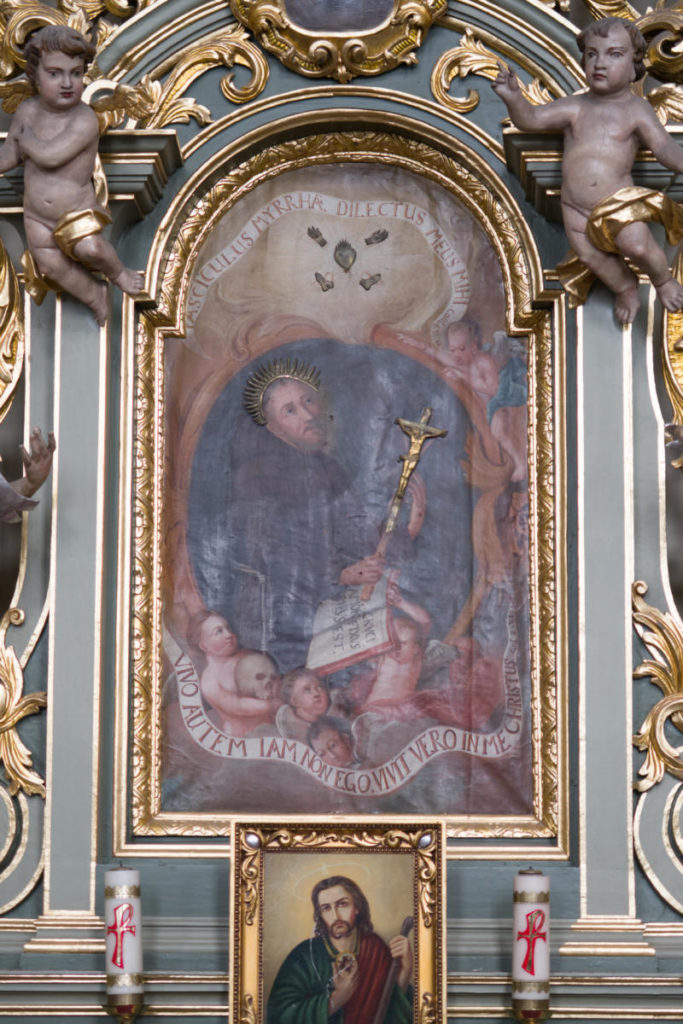 The patron saint of the side altar is St. Francis of Assisi – the founder of a mendicant order. He lived in 1181/1182-1226, he abandoned wealthy lifestyle and turned into a man who led a simple life of a wandering preacher. He based the rule of his life on poverty and love to every being, also animals, which he called “little brothers”. He was given stigmata, that is wounds reflecting the would of Christ, which attested to his strong connection with God. Their symbolical representation has been shown in the form of silver plaques in the shape of wounded parts of body, that is feet and the heart.

In the crowning of the altar of St. Francis, an image of St. Sebastian was placed, who was a 3rd-century martyr and the leader of the personal guard of Diocletian. He scolded the emperor for cruelty, especially towards Christians, for which he was sentenced to death by piercing with arrows. According to “The Golden Legend”, St. Sebastian survived  the cruel punishment and when he recovered, he went to the emperor again to scold him. He was captured for the second time, and the emperor ordered Sebastian to be clubbed, and his body thrown to Cloaca Maxima. However, his body was miraculously found and buried with reverence in the Roman catacombs. 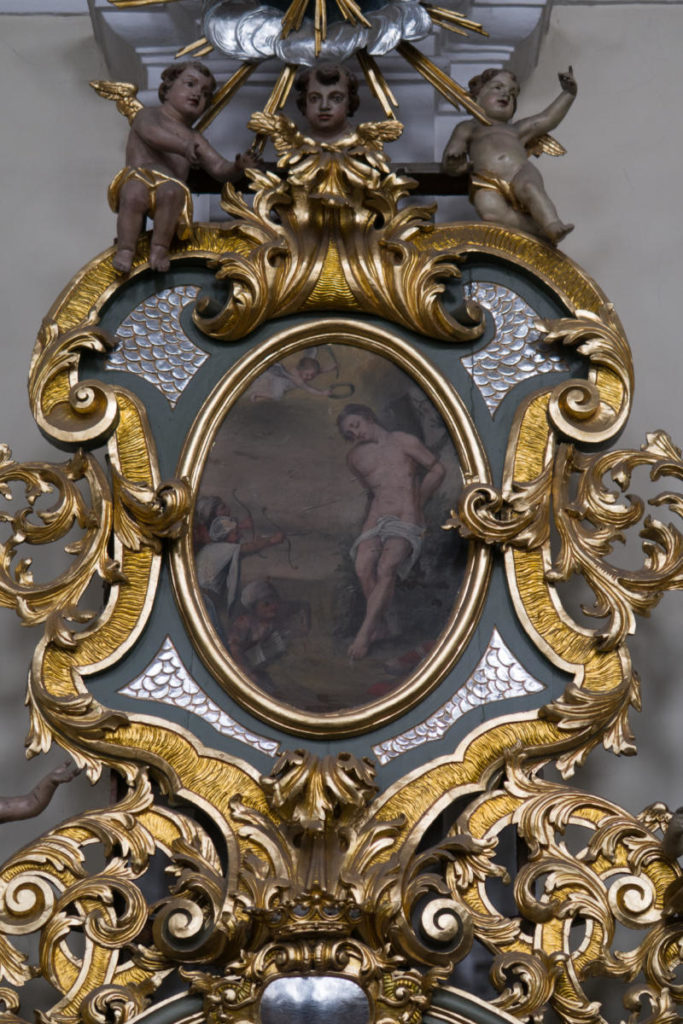