In the main altar there is an image of the Holy Mother of Blizanów. It has accompanied the people from Blizanów for 400 hundred years now and it has enjoyed a special cult because the prayers said in frot of the image are very often heard. The evidence for this are numerous votive offerings donated by the faithful.

The image is a copy painted in life from the original painting from Częstochowa. It was created in the 17th century in one of the many workshops located by Jasna Góra, which created comissioned replicas. 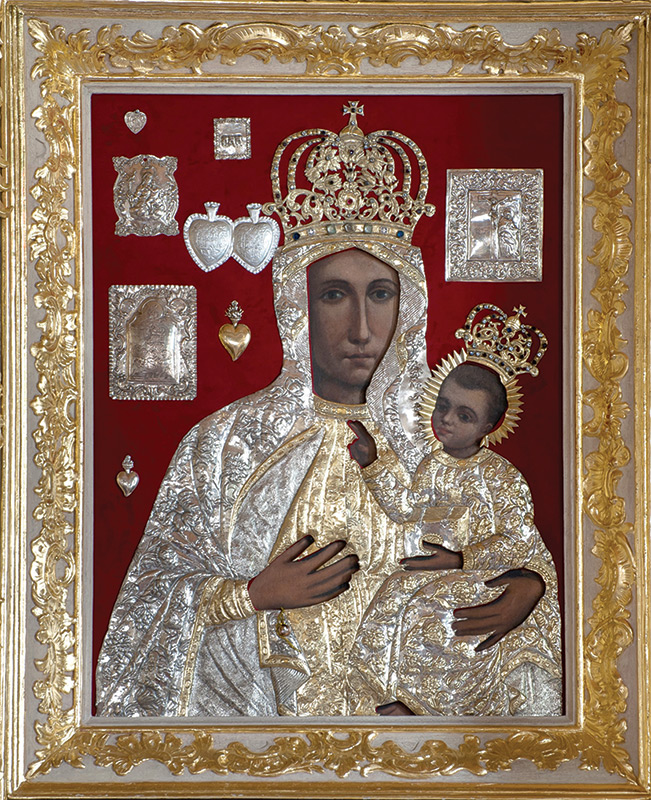 1
A dress made of silver sheet
2
Crown
3
Crown

In the painting of Mother of God from Blizanów, which is a 17th-century copy of the painting of Black Madonna from Jasna Góra, many votive offerings can be found. A votive is an object offered in the form of plaques carved from a silver or gilded sheet, sometimes in the shape of heart, hands, eyes which symbolize a specific healing. The offerings were hanged often around altars which were objects of particular worship. There are over 100 of them in the church in Blizanów. One of the most interesting offerings shows three teeth, and the most valuable and biggest one is a silver dress and two crowns offered around 1760 by the Rogoźno castellan’s wife – Anna Molska.

Maksymilian Molski was a friend of the Franciscan and Jesuit orders from Kalisz and he decided to popularize the cult of their saints among the citizens of Blizanów. The altars founded by him were divided by narrow frames into quarters where images of selected saints were put: just like in a tableau or a photo album. 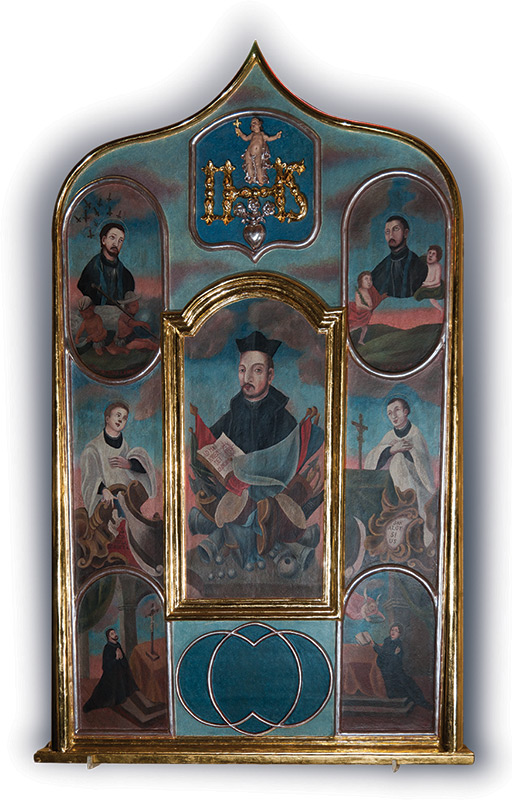 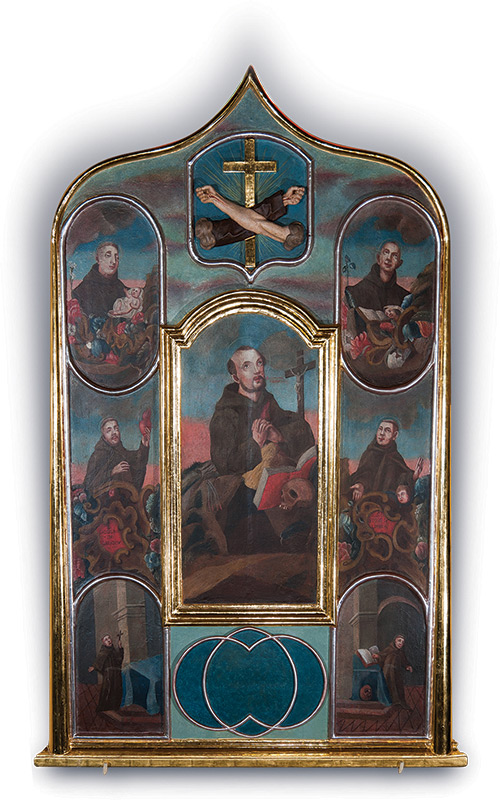 There is a Rococo-period altar dedicated to St. Thecla in the north chapel. Noteworthy in this impressive architectural composition is a late-baroque painting placed in the main panel. Presumably it presents St. Thecla. The painting is framed by a refined, gilded bordure. Not only does it show the woodcarver’s talent, precision and experience but also his considerable theoretical knowledge. The craftsman was probably inspired by legends and life of St. Thecla because one can spot the attributes of the saint intricately carved among gilded, wood ornaments:

St. Thecla was a Christian virgin and a disciple of St. Paul who lived in the 1st century AD. When after her conversion she broke off her engagement with a pagan fiancé who her rich parents had chosen for her, she compromised herself in the eyes of the closest ones. For her love for Christ, she was sentenced to death by burning on stake. However, unexpected rain put down the flames thus preventing executioners from carrying on with the punishment. Therefore, she was thrown to  hungry lions. But once again God saved her: the animals were standing still as gentle as lambs.

An extremely interesting object is a Baroque painting from the beginning of the 17th century, which shows the scene of coronation of the Blessed Virgin Mary. This multiple figure composition can be divided into the heavenly zone and the earthly zone. In the first zone, in the centre there is the Blessed Virgin who was presented while she is being
crowned by God the Father, the Son of God and the Holy Spirit (in a form of the dove). The group is accompanied by angles sitting in the clouds.
On the other hand, the bottom zone is filled with figures of three saints presented against a landscape in the  background, who are kneeling and adoring the heavenly scene. On the left, there is St. Adalbert in a gold cape
and a processional cross in his hand. On the right we can see St. Stanislaus with a crozier who is accompanied by a small figure of Piotrowin. St. Nicolas and his atributes – three gold orbs is in the middle.

The church in Blizanów was built in 1532, and in the 17th century it underwent rebuilding to a big scale and change of the furnishings. During this period, benches for the patrons were put in the chancery which were designed to the local nobility or village owners. Maksymilian Molski was a castellan in Rogoźno, and his wife was a founder of the polychromy and the painting of Mother of God with Child. Patrons’ (founders’) benches highlighted a special position of the aristocracy, who participated on the holy mass seated in the sacrum zone, separated from other parishioners.

September 8 (The Nativity of the Saint Virgin Mary) and December 6 (st. Nicholas)